The 1st Pinelands scout troop was first started in about 1923, by Mr F Blomkamp, who later became the mayor of Pinelands in 1960. It was felt that the boys of Pinelands needed scouting, and the Garden City was rapidly growing in the area of what used to be the Uitvlugt Forest. Much of the troop’s early scouting was done in the bush which is now the western end of Pinelands. The troop started of with a strength of about a dozen boys, but was not registered with the scout headquarters. The troop faded from existence in about 1926, and was not restarted for 2 years.

In 1928, it was once again felt that the boys of Pinelands needed scouting, and a room was set aside in the Uitvlugt Forester’s house for scouts, cubs and guides. A Miss Hansen gathered together 20 boys of cub age and solicited the help of Mr Ron Nicol (later a commissioner for the SAHQ) to act as cubmaster. The pack was registered on 19 April 1928, and the cubs were invested on 28 June.

Also registered on 19 April 1928 was the scout troop, consisting of only four boys, and a rover crew of 3 members. With Len Kerby and a Mr Thresher as ASM’s, a Miss Nellie Devitt joining as ACM and a MR Gardener as GSM, the troop grew in strength, and this team of scouters established scouting in Pinelands. All progressed well until 1931, when the position of SM became vacant. Colonel W O Webb filled the position, and caused all of the other scouters to leave, some of whom moved to 1st Mowbray as assistants. When Col. Webb resigned in 1933, Ron “Zimba” Nicol was asked to return as GSM, which he did, and stayed on until 1940. In his postion of GSM, Ron organised a group committee, which met for the first time at his house on 28 October 1936. Cub and scout meeting continued to be held at the forester’s homestead, with Ron acting as SM.

Mr Stan Wells took over as SM in 1937, and a camp was held at Witels before christmas 1939, as well as other one-night camps in Pinelands itself. In March 1937, the troop’s first King Scout badge was awarded Ian Ross, followed 2 months later by Douglas Wells.

In March 1940, Ron Nicol signed up for the war, and went north. Before leaving, he approached his committee chairman, Mr D “Madala” Pulker to succeed him as GSM, and Cedric “Eagle” Black acted as SM for a short time. About this time, the old Uitvlugt homestead was demolished to make way for houses. The meetings were held in a small shack behind a house in Letchworth Rd. Plans and funds were organised for the building of a hall.

The size of the troop at this time was about 60, and a split between juniors and seniors was made, which caused a lot of bad feeling, as it was not done fairly. The juniors met in a shack behind the civic hall, and the seniors in a classroom in the Pinelands Primary (Blue) School. No big troop camp was held that year.

Owing to “Madala” Pulker’s great organising abilities in fundraising schemes, the foundation stone of the first hall was laid by Mr R Stuttaford, MP of Pinelands, on 24 April 1941. The hall was built over weekends, in stages, and often work done the previous weekend had been destryed during the week. Materials during the war years were hard to come by, but most were donated. Many scouters joined for short periods during this time, but none stayed for long due to their involvement in the war effort. A camp at Witels was held by Mr Pulker and his wife, and 3 King Scout badges were awarded to members of the troop.

A camp at Witels was held once again by “Madala” Pulker and his wife, but extra food for camps was almost impossible to obtain due to the war. The completed hall was officially opened by Lady Olave Baden-Powell on 4 July 1942. Anthony Pulker obtained his King Scout badge in this year.

Another camp was held, this time at Oak Valley, Elgin, again run by Mr and Mrs Pulker. Troop equipment stored in Mr Oram’s garage was burned when the Ossewa Brandwacht set it alight, because it also contained equipment for a fete in aid of the war effort. The insurance paid out, and a collection was taken amoungst the residents, which generated a lot of funds.

The Pulkers’ again held a camp at Oak Valley. A rover crew was started for the second time on 26 May with 8 members, and was run by Herbert Alsop. The rovers were, however, pressurized to join the war, which most of them later did, and the crew was forced to close. Their den was then used as a scouter’s room, and later as a QM store.

“Skipper” Lusty became the new SM after returning from the war. He had previously held a warrant in Cape Town, although with another troop. No camp was held this year.

The history and events are very vague. A camp was run by “Skipper” Lusty at Witels in 1950, and Garnet de la Hunt obtained his King Scout badge in the same year.

No camp was held. SM Lusty approached Mr Norman “Cookie” Cooke to help as an ASM. Mr Pulker took up the position of GSM. “Skipper” Lusty resigned on transfer, and “Cookie” took up the post as SM. A third attempt was made to establish a rover crew on 18 January1951, again by Herbert Alsop, with a strength of 3, but it once again did not last long.

A camp was held over Easter at Wemmershoek, run by “Cookie”. Cooke was made SM after attempts to introduce other scouters had failed. He did not believe in sleeping in tents, or swimming in costumes.

Another camp was held at Wemmershoek, and about 10 scouts attended a Jamborally at Stellenbosch.

Oak Valley was the site of this year’s camp, which was run by “Cookie”, “Beaver” Haigh, and “Bambie” Strydom. There was a bit of trouble with parents and HQ. “Cookie” never placed much emphasis on badge passing, competitions etc. but was popular with the boys.

Pinelands was formed into a district, CW7, under the first DC “Impie” Bryant. A camp was held a Vergelegen, Somerset West in January. A number of ex-scouts (over 18) joined the camp as assistants. They got hold oof one scout, and some red paint, and, well, painted him. The incident was made public, and stirred up much consternation with parents and HQ. As a result, parent “pressure groupd” split the troop up, and the 2nd Pinelands troop was formed on 28 September.

A camp was held in January at Hout Bay, run by “Cookie” and Ian McLellan. “Madala” Pulker resigned as GSM and took over from “Impie” Bryant as DC on14 May. “Impie” did not enjoy being DC, but was convinced t stay on as ADC. “Bok” Oram took out a GSM’s warrant in June ’56 t fill the gap – he had been on the group committee. It was decided to send a boy to the Jubilee Jamboree at Sutton Coalfield in England, and a fete was hed at the civic hall on Noveber 10 to raise the 250 Pounds required. 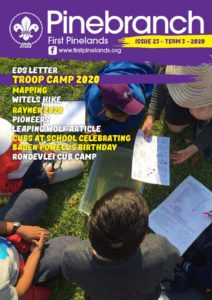 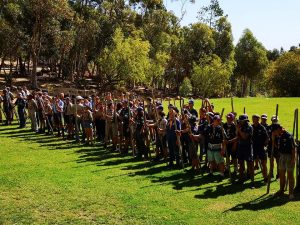